The History of English Dictionaries 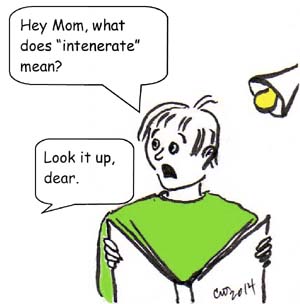 The earliest dictionaries were bi- or multi-lingual lexicons supporting the translation of one language to another. The oldest known example is Akkadian Empire cuneiform tablets dated to about 2300 BC which contain Sumerian-Akkadian wordlists. The earliest surviving single language dictionary is a Chinese dictionary from around 300BC. The first dictionaries which included the English language were glossaries containing French, Italian, or Latin words along with definitions in English.

In 1220, John of Garland published a book he titled "Dictionarius" to aid in Latin diction and coined the term dictionary. An early listing of English words, although not yet in the form we would recognize today as a dictionary because it was not organized alphabetically, was the 8000 word "Elementarie" published by Richard Mulcaster in 1582.

Then in 1604 Robert Cawdrey published the first single-language dictionary of English titled "Table Alphabeticall". It featured short definitions of 3000 words arranged alphabetically. Before this dictionaries were arranged by topic. Samuel Johnson took dictionaries to the next level with his production in 1755 of "A Dictionary of the English Language". His dictionary remained the standard for over 150 years and is considered by many to be the first 'modern' dictionary.

Now the American Noah Webster entered the scene. Noah Webster (16 Oct 1758 -28 May 1843) dissatisfied with his own early education became an ardent educational reformer. Webster's goal became to standardize American speech, since Americans in different parts of the country used different languages. They also spelled, pronounced, and used English words differently. His two big achievements resulted in an enduring influence on both American education and language use. The first was his "Blue-Backed Speller" nicknamed that because of its cover. More than 100 million copies sold and five generations of Americans learned a consistent way to read, spell, and pronounce English words. Prior to that (and, in truth, for many years after its publication) people spelled phonetically.

Originally titled "The First Part of the Grammatical Institute of the English Language", the title was changed in 1786 to "The American Spelling Book", and again in 1829 to "The Elementary Spelling Book". It also helped create the popular contests known as spelling bees. Slowly, edition by edition, Webster changed the spelling of words, making them "Americanized". He chose s over c in words like defense, he changed the re to er in words like center, and he dropped one of the Ls in traveler and simplified words like "waggon" to "wagon" and "musick" to "music". He also added American words, like "skunk", "chowder, "squash", "Senate", and "Congress" which did not appear in British dictionaries. At first he kept the u in words like colour or favour but dropped it in later editions. He also changed "tongue" to "tung"-an innovation that never caught on.

In 1806, Webster published his first dictionary, "A Compendious Dictionary of the English Language". It was the first dictionary to describe English as it was spoken in North America and contained 30,000 entries. In 1807 Webster began compiling an expanded and fully comprehensive dictionary, "An American Dictionary of the English Language"; first published in 1828 when Webster was 70 years old. To evaluate the etymology of words, Webster learned over twenty-five languages, including Old English (Anglo-Saxon), Gothic, German, Greek, Latin, Italian, Spanish, French, Dutch, Welsh, Russian, Hebrew, Aramaic, Persian, Arabic, and Sanskrit. It only sold 2,500 copies but gained wide acceptance in public institutions and universities of the time. He was forced to mortgage his home to develop a second edition, and his life from then on was plagued with debt.

In 1840, the second edition was published in two volumes. The second edition of his dictionary cost $20 still a luxury item the middle class could not easily afford. On May 28, 1843, a few days after he had completed revising an appendix to the second edition, and with much of his efforts with the dictionary still unrecognized, Noah Webster died. However, his dictionary became the standard for English dictionaries. For example, Blackie and Son in Glasgow published the first general dictionary of English that relied heavily upon pictorial illustrations integrated with the text in 1850. Using Webster's for most of the text, they added some additional technical words and illustrations of machinery to create "The Imperial Dictionary, English, Technological, and Scientific, Adapted to the Present State of Literature, Science, and Art; On the Basis of Webster's English Dictionary".

After Webster's death, brothers George and Charles Merriam negotiated a contract with the Webster heirs to sell the remaining copies of the 1841 edition of Webster's dictionary and more importantly, the right to publish their own revisions. Working with Webster's son-in-law and literary executor, Professor Chauncey Goodrich of Yale University, the Merriam Company published the third edition of An American Dictionary. Reducing the margins and using smaller type enabled the book to become one volume and be sold for $6. Aggressive marketing to education venues resulted in a blossoming of sales. The revision included illustrations, synonyms and more words. People who used it in school bought a copy for their personal library. Merriam continued to publish revisions and, by 1890, the dictionary included 175,000 words. In 1889 all the earlier copyrights to Webster's work had expired, and numerous publishers put out works of their own making sure they included Webster's name in the title. To clarify that their work was a direct descendant of Webster's original dictionary, Merriam titled the 1890 version "Webster's International Dictionary of the English Language". Numerous editions have been published since as English has become the Lingua Franca of world commerce and education with approximately one billion people learning the language every day.

Another popular English dictionary entered the scene in 1947 when Random House entered reference publishing with the highly successful "American College Dictionary". In 1966 it was followed up by the equally successful unabridged "Random House Dictionary of the English Language".

The Philological Society of London started cataloguing words in 1859. The initial ten-volume work now known as the "Oxford English Dictionary" (OED) was published 71 years later. The Society was established in its present form in 1842, consisting partly of members of a society of the same name established at the University of London in 1830 'to investigate and promote the study and knowledge of the structure, the affinities, and the history of languages'. It was in 1857 when Richard Chenevix Trench read his paper to the Society titled 'On some deficiencies in our English dictionaries' that the Society got to work compiling what would ultimately become the Oxford English Dictionary. The first volume of the "New English Dictionary" was finally published in 1884 with its tenth and final volume published in 1928. The effort to catalog English words included not only definitions but when and where words became part of the lexicon. From words recognized as existing before the 12th century like "believe", "laugh", and "sorrow" to those added recently like "icecapade", "database", "techno", the OED records not only the definitions but chronologically arranged quotations illustrating the word's use through the years beginning with its earliest known appearance. Publishing rights were signed over to the Delegates of the Clarendon Press in the University of Oxford on 1 March 1879 and overt links between the Philological Society and its Dictionary were finally cut in 1933 when the compendium was reissued in twelve volumes under its official new title "The Oxford English Dictionary". The OED currently lists more than 600,000 words.

In parallel to the development of dictionaries is the development of another handy reference - the thesaurus. The word "thesaurus" is derived from 16th-century New Latin, in turn from Latin thesaurus, from the Greek thesauros, literally "treasure store", with the general meaning of a collection of things which are of big importance or value. It is a reference work that lists words grouped together according to similarity of meaning (containing synonyms and sometimes antonyms), in contrast to a dictionary, which provides definitions for words, and generally lists them in alphabetical order. The main purpose of such reference works is to help the user "to find the word, or words, by which [an] idea may be most fitly and aptly expressed" - according to Peter Mark Roget (1779-1869), compiler of the best known thesaurus in the English language which was created in 1805 and published in 1852 with 15,000 words.

Holidays to celebrate these achievements are designated on the birthdays for two of the most recognized lexicographers; 16 October is Dictionary Day honoring the birth of Noah Webster while 18 January is Thesaurus Day in honor of Peter Roget on his birthday.

Other Articles of Interest

Visit our Reference Desk page for a complete listing of articles and worksheets.